Legion of Nerds went to @longbeachcomiccon this year. It was a good time all in all. Head over to the link in bio to read the review. #LBCC #LBCC2018
Starting tomorrow April, 10th Legion Of Nerds co founder @_major_lols will be on this new schedule streaming #Fortnite and #Overwatch be sure to stop by his stream! #Twitch #Streamers #Gamers #SupportSmallStreamers Twitch.Tv/Major_Lols
Bad quality yes I know. But how many #infinitystones do you see in that gauntlet. I count four. This is from the latest of new footage that #marvel dropped in their 1 min teaser trailer yesterday. #mcu #infinitywars #thanos #infinitygauntlet
Newest images dropped today for Marvels Infinity Wars. Who is ready for this movie already. I know I am. Any predictions or theories let's discuss in the comments. #marvel #mcu #infinitywar #ironman #captainamerica #warmachine #vision #falcon #blackpanther #Spider-Man #nebula #bucky #shuri #gamora #thor #starlord #groot #rocket #doctorstrange #okoye #blackwidow #drax #mantis #scraletwitch #wong #thanos #nohawkeye #whereshawkeye
Stage 3 of the inaugural season of #OverwatchLeague begins this Wednesday, April 4th at 4:00pm PST! The first match is The #ShanghaiDragons versus The #DallasFuel Be sure to follow Twitter.com/_major_lols for live tweeting of all the matches! #Esports #Overwatch #ProGaming #Blizzard
Happy Easter to you and yours from The Legion of Nerds! #Overwatch fans will get this reference ;) Image found on Tumblr account: YoungGenji. Credit goes to the artist who’s name is written on the image just under the text on the right. #Holidays #HappyEaster #Zenyatta #Nerds #Gamers #OverwatchArt

In Stage 1, the Philadelphia Fusion we saw take to the arena was a lineup flushed with talent, struggling to find a range of consistency in their play.  This was rather perfectly illustrated when the team was able to take on the giants of NYXL with a 3-2 victory, then be taken to 5 games by both the Shanghai Dragons and the Florida Mayhem.

Philadelphia began Stage 2 of league play with the debut of Josue/Josh “EQO” Corona. Known mostly from his play in the Overwatch World Cup in 2017 as a Tracer, Genji and Soldier specialist, his appearance was met with much question on how he would mesh into this squad.  Was this a player whose hero pool would benefit their roster? Is he worthy of being played in place of Shadowburn?

EQO took the opportunity to answer those questions with a booming ‘YES’ in his first map of play in Overwatch League against the Boston Uprising, displaying a dominant Genji play style which gave the Fusion a steam-rolling victory on Hanamrua and a 4-0 victory for the series.

Since then EQO has displayed repeated and consistently high performances on a myriad of heroes.  Beyond that, this aggressiveness brings more than just unbridled frag hunting. This young player has showcased a strong discipline that accompanies his in-your-face DPS style.  While he is continually looking to dive in and create opportunity for an opening pick, he is constantly mindful of his positioning. Notably on Genji, we see continual rotation from this player aiding in not only attack, but also damage mitigation with his dive tanks via Deflect and quick peels for his support line.

His individual performance has been a powerful addition, but even more impactful is the change it has had on the team dynamic of the Philadelphia Fusion.  Carpe not only has a strong secondary on his flanks, but also is able to capitalize on positional mistakes being created by EQO’s aggression.

The strong front-line presence of EQO has enabled Fragi to feel comfortable his natural tanking style of very forward placement, knowing that tight follow-up is on it’s way.  Similarly Poko in his off-tanking position has found comfort in this dynamic. His D.Va continues to light up the kill feed as he is able to commit fully to either an aggressive dive, or defensive peel, confident that his tanking counterpart has the support to last through the fight.

The ripples continue all the way through to the support line, finding Boombox and Neptuno caught out by flanking DPS less, and Boombox in the kill feed more. Even the just recently eligible Simon “snillo” Ekström has seen fantastic results.  As a more responsive Tracer specialist, Snillo relies on continuous information from his teammates. Watching Snillo’s impeccable positioning and split-second response to calls and target selection is a testament not only his game-sense, but to the fluidity this roster has developed together.

This Philly roster, which was not so long ago chastised for continual over-extension and lack of effective communication, is now rightfully praised for their ability to play as a unit.  I’m extremely excited for their upcoming battle against The Los Angeles Gladiators, another strongly rising aggressive roster. It promises to be a battle you do not want to miss. Tune in Wednesday March 21 at 4:00PM PST on the Official Overwatch League Twitch Channel.

“The world could always use more heroes…”

Finally we get to welcome “Hero 27” to the roster by name. Welcome Brigitte Lindholm!

Brigitte, the daughter of Torbjörn and Ingrid Lindholm, and also Reinhardt’s squire, has officially been announced as the highly anticipated hero 27. The official reveal was prefaced by three teasers from the official Overwatch twitter account.

The first teaser on February 24th, gave us a glimpse into a previously classified mission Operation: White Dome. In the mission report for Op: White Dome we got a name we’ve never heard before, Private First Class Emre Sarioglu, as well as the mention of the injury that took Torbjörn’s arm and would have taken his life had Reinhart not intervened. Along with the after action report, the teaser also gave us a letter written by Torbjörn to his wife Ingrid. In this letter we see the mention of an unborn child whom Torbjörn has promised Reinhart he could name as well as appointed Rein as the unborn baby’s Godfather.

On February 26th, two days after the release of the letter and after action report we got our first glimpse of the weapon of choice for Hero 27.

This image had fans not only speculating on the type of weapon this is, but also looking up the word on the schematic to translate them to English. At this point it seemed that for the most part fans were already putting together that Hero 27 could be Brigitte. Still, there were some who hadn’t settled on Brigitte as there was also some talk of the schematic showing a weapon that was reminiscent of the one wielded by The Junker Queen.

Our last teaser was posted by the Overwatch Twitter account on Feb 27th, this image a bit more detail that all but confirmed the new hero would indeed be Brigitte. 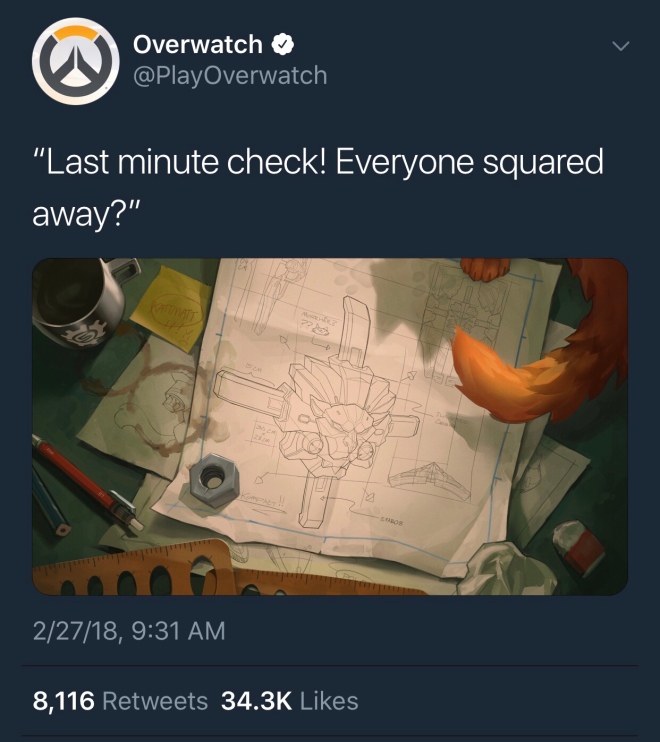 With the symbol on the mug and the shield, this image confirms that hero 27 has a relation to both Torbjörn and Reinhardt. We also get a bit of a glimpse of the fabled Jet Pack Cat who was a scraped original Overwatch hero. If you look closely you can see a sketch of Jet Pack Cat peeking out from underneath the schematic for the shield. It’s even circled for us in a ring from the coffee mug.

On February 28th, after much hype and speculation hero 27 was finally revealed and Brigitte Lindholm was confirmed as our new hero.

She was released today on PTR just before 1:00pm PST. I had the chance to play her today but that’s a different story for a different article, though I will say she’s very interesting.

With her reveal we got some in depth details about her abilities. She’s a support class hero with ranged melee attacks and a a very clutch healing ability.

Here’s what Blizzard has to say about her abilities from their official Overwatch site:

Her current abilities have the potential to change the meta that is currently played in Overwatch. With her close quarters combat and stun capabilities it is going to very hard for heroes that are typically played as flankers to be viable against her. She seems like an overall great addition to the hero roster, but I do need to play her a bit more to be more through in my assessment of her in game role.

All in all I am very excited to have a new hero, especially one that will come with some inevitable changes to how the game is played. With Mercy Meta over, could Brigitte lead us into a “support tank” meta? Let me know your thoughts on Brigitte Lindholm and where the addition of her to the hero roster could lead the current meta. Be sure to check out Brigitte’s Origin Story then sound off in the comments below!